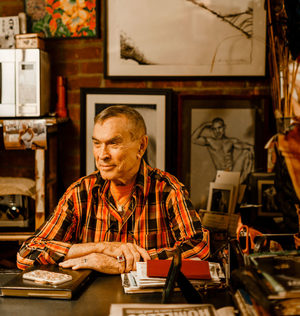 December 2018 - There's a very good and extensive article right now on "artsy.net" called "Inside the 'Phallus Palace, Charles Leslie's Trove of Queer Art"... over his shoulder in this pic from the article is a drawing he bought from me of model Giovanni in a jock (under a very erotic Andy Warhol Felatio-scene Print I cropped out for my social media posts).  Charles is one of the people from my past most responsible for making me not shy away from presenting nudes or explicit content in my artwork, and he's one of the Founders of the Leslie-Lohman Museum of Gay & Lesbian Art here in NYC.  Check it out!!  (Click the photo to be linked to the article). 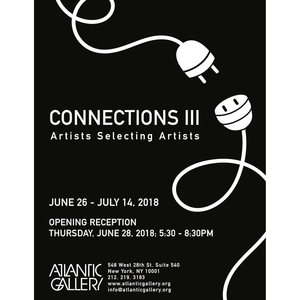 June / July 2018 - I'm happy to say I'll be participating in Atlantic Gallery's "Connections III" summer small works group show for a second year in a row!  I'll have two small oil paintings, a portrait and a landscape, on display in this nice two week stint.  Other artists chosen this year include some folks I know & love:  Jeff Miller, Dan Romer, Jason Eng, Kung Ko, Kent Lau, Joseph Cavalieri, John MacConnell, Michael Letzig, Steven Broadway, and Richard Rosenfeld. There will be a cool opening on Thursday, June 28th from 5:30 to 8:30, and the show closes Saturday, July 14th.  Would love to see you there!!
June 2018
6/16/2018 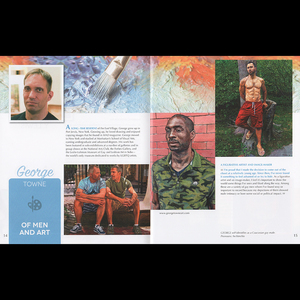 June 2018 - Happy to have had my artwork featured in a spread in the Amidacare Pride Magazine, they nominated me as an 'LGBT+ Innovator for Change'!  Click on the Image to go to an online PDF of the whole magazine; my spread starts on page 14.  Happy Pride month !!
February 2018
1/26/2018 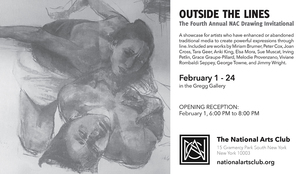 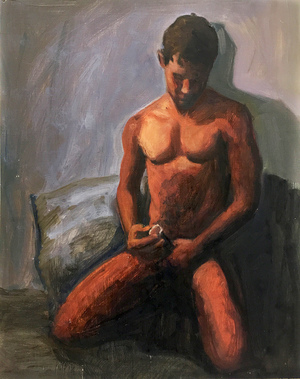 January 2018 - OK, so this is the artwork I did in the early 90s when I was real young that a friend had bought at the time, & I hadn't seen it since, but he donated it to the Silent Auction for the "Visual AIDS POSTCARDS FROM THE EDGE" show this upcoming weekend.  It's an oil painting on prepared paper of an old fiend of mine from the ACT-UP days, Mark Allen.  Context to note is that this was done before HIV retrovirals that now keep people alive existed, so the subject was him demonstrating how to put on a condom at a time people needed to know this more than ever.  Also, although it was a dark room and I only blocked the face in, I always liked that I could tell it was Mark from the shape of his head, etc... Anyway, nice to see it surface again on a Chelsea Gallery wall & it will be on display at the benefir next weekend that I mentioned in the last post, and people from out-of-town can also place a bid online (click the image to be linked to the Visual AIDS online auction, powered by 'Artsy')!
January 19-21, 2018
1/3/2018 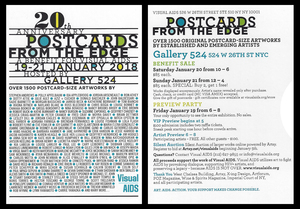 JANUARY 19-21, 2018 - I scanned the Front & back of this Invitation... once again I will be participating the the Annual Fundraiser for VISUAL AIDS called "Postcards From The Edge"!  I'm doing a little painting on a postcard that will be available for purchase for first-come-first served the morning that sales begin, and special for this year... a friend who had purchased an oil-on-prepared paper painting oil sketch from when I was in my 20s has donated that piece for this year's silent auction... more on that when I know more, but click the image to be linked to the VA site, and hope to see you there!!  Oh, yeah... and HAPPY NEW YEAR !!
Loading...