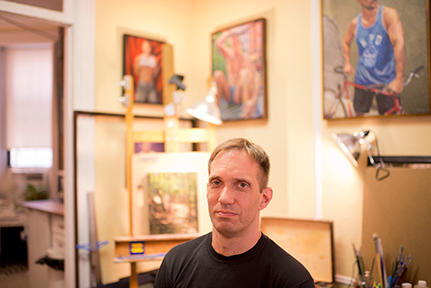 George Towne is an East Village artist / painter / image-maker / designer who loves a challenge and a great cup of coffee.
Born in Pennsylvania and raised in Port Jervis, New York, Towne realized he loved drawing as a young man, and often found himself copying caricatures out of old Mad Magazines. After his high school art teacher bought him his first set of oil paints, he started to become more serious about art making, and began to study work of the old masters, especially Caravaggio, Velasquez and the American painter Thomas Eakins.
Towne came to New York City 20 years ago to attend the School of Visual Arts to study painting and find like-minded community. His artwork has been featured in solo exhibitions at venues such as the Michael Mut Project Space in New York
City, The Barbara Ann Levy Gallery, in Cherry Grove, on Fire Island, and the
Delaware Valley Arts Alliance, in Narrowsburg, New York. His work has
been highlighted in several group shows, including recent ones in both spaces
(Wooster St. and Prince St.) of the Leslie + Lohman Museum of Gay and Lesbian
Art, at the Forbes Gallery on 5th Avenue, and the National Arts Club on
Gramercy Park.
His work has been reproduced and discussed in publications such as American Artist Magazine, The Art of Man, Art & Understanding (A&U) Magazine, Time Out New York, and Metrosource.  Book compilations such as Bruno Gmunder's Stripped, Uncensored, Big Love and Raunch, as well as Schiffer Publication's 100 Artists of the Male Figure, and Firehouse Studio Publication's Powerfully Beautiful all include his work. He has been known to attend some of NYC's gay men's drawing groups, including "The Leslie/Lohman Erotic Drawing Studio".
George has settled in New York's East Village neighborhood, and has continued
with his love of painting and depicting male images as well as his love of
landscape/citiscape and context.  By day, he also designs book interiors at Penguin Random House.
Loading...