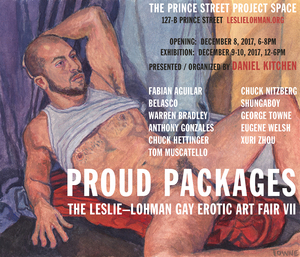 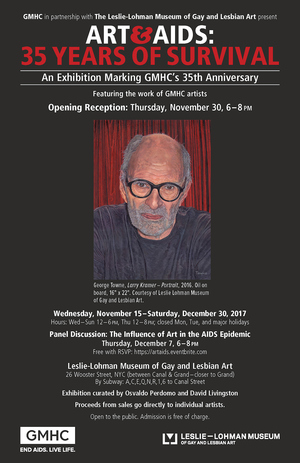 Nov / Dec 2017 - Very pleased to say that GMHC has selected my portrait of Larry Kramer to be on the invitation to the exhibition of GMHC artists: "ART & AIDS: 35 YEARS OF SURVIVAL", to be held soon at the Leslie–Lohman Museum of Gay and Lesbian Art!  Although the opening reception will not be for several weeks (Thu, Nov 30th, 2017, from 6-8PM); the show will be on view from Nov 15 to December 30th.  Proud to be able to honor Larry, one of the founders of GMHC & of ACT-UP; still survibing and still a powerful community voice!

It will be a large group show with over 50 artists; and also selected I will have a Fire Island Ocean Landscape oil painting, and the watercolor used for the GMHC Holiday card (of a snowy Stuyvesant Square Park) on display.  Save the dates, and please come see it if you can! 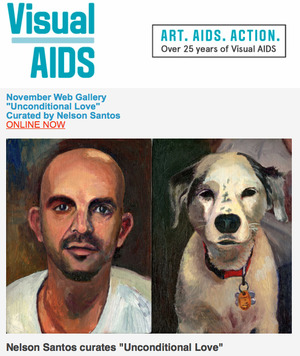 A double-portrait I did several years ago was just selected for an online "web gallery"... I only very rarely do paintings of pets/animals, but I had done a small painting of Visual AIDS's past director Nelson Santos and his dog at the time named Sparky for a cool art show he was curating called "The Sparky Project" involving many artists. Just this month, Nelson curated this online web gallery called "Unconditional Love" about people and their pets/animals; and included the image!! Check it out & read his touching curatorial essay here: (click the image to be taken to the page on the Visual AIDS website - www.visualaids.org )
July 2017
7/4/2017 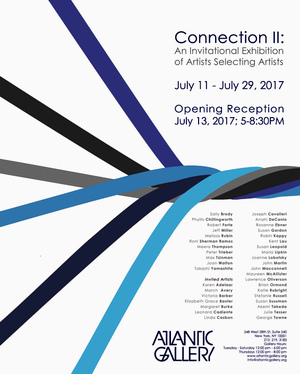 July 13 - 29, 2017 - Pleased to announce that I will have two small works in a two-week group show called "Connections II" in West Chelsea's "Atlantic Gallery"! It's a two week exhibit including artists such as Jeff Miller, Joseph Cavaliere, John MacConnell, Kent Lau and many others.  I'll have a small landscape of the Meatrack on display, as well as a portrait of my friend, the renowned artist and illustrator Robert W. Richards!  The gallery is at 548 West 28th St., Suite 540.  The opening is Thursday, July 13 from 6-8:30, please come if you can!
Late Spring 2017
6/6/2017 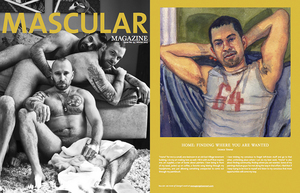 Late Spring 2017 - I was thrilled to hear the news that I was among those selected to be in the most recent issue of Britain's "MASCULAR" Magazine! This issue was guest-curated by renowned photographer and recent Chair of the FIT Photo department, Ron Amato, who decided to use the theme of "Home".

Those selected were gay men who were asked to submit artwork that reminded them of their personal concept of Home (i.e. - memories, actual family vs. chosen family, actual place vs. concept of a place, etc.). I submitted & trid to choose figurative images where the model had posed in either my apartment or their own, and I'm happy to say that Ron and publisher Vincent Keith chose 13 paintings in four spreads, along with a few sentences I wrote, that start on page 60 of this fine issue.

It's a digital magazine (click on the image to be linked to the site), which may take a few seconds to download... you should also be able to right-click and save it as a free PDF to your computer, depending on your device.

Check it out at: www.mascularmagazine.com 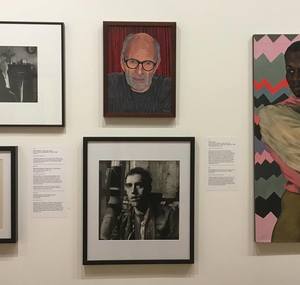 April - May 2017, the show "Expanded Visions" at Leslie Lohman Museum continues unti May 21st - please check it out if you can!  My painting of Larry Kramer is well curated with other LGBT heros in a section including a Peter Hujar photo if the late David Wojnarowicz, and there's a photo by one of the first female photographers ever taken seriously as an artist named Berenice Abbott right next to it.  For the show, the museum has DOUBLED in size and is showing point-on work from the permanent collection. The rest of the exhibition has scores of artists from Albrect Durer in the 1400's - all the way up til present day - don't miss it!  Click the link to go t0 the Museum's website.
Spring 2017
3/19/2017 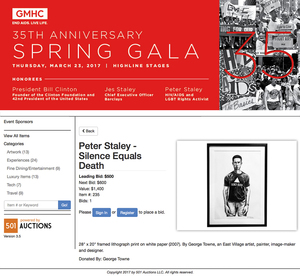 March 2017 - I was able to donate a Lithograph Print I completed of activist Peter Staley that is/will be a part of the "GMHC Spring Gala Luxury Auction', which is online now and culminates at the exciting event this Thursday at Highline Stages, 441 West 14th, this Thursday, March 23rd at 6:30PM. There are other works of art in the Auction, including a Tom Otterness sculpture and a Shepard Fairey print, all benefitting GMHC's programs and services. Peter will be honored for his strident activism at the event, as well as his brother, Jes Staley (the Barclay's CEO), along with special guest Bill Clinton (!). If you're able to come to the special dinner at 6:30, or to the Dance after-party at 10pm, it would be great to see you at either event. To find out more info or to place an early bid on the print, click on the image to be linked to the GMHC Gala site. Hope to see you there!
March through May, 2017
3/2/2017 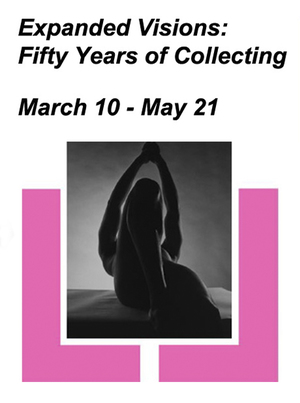 March 10 - May 2017 - I'm very pleased to announce that I will have a portrait painting in the highly anticipated re-opening of the Leslie-Lohman Museum next week! For months the Museum has been closed in preparation for it's expansion... the total exhibition space will be doubling in size in it's ground floor home on 26 Wooster St (on the corner of Grand St., one block above Canal St. in Soho). The group show is called "Expanded Visions: 50 years of Collecting", and it will feature over 250 works on view. The public opening will be Friday, March 10th from 6-8PM, and the Museum will be open 7 days a week until May 21st. Click on the Image (photo by the legendary Hollywood photographer Horst P. Horst) to be linked to the Museum's webpage. Please stop by if you can!!
January 2017
1/14/2017 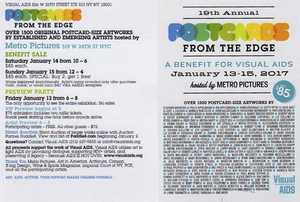 January 2017 - Happy that I am participating once again in this year's "Postcards From The Edge" Show, the huge exhibition / art sale / benefit & kick-ass party in a big Chelsea gallery, which is being held this year at ""Metro Pictures" - 519 West 24th Street on Friday, Saturday, & Sunday (Jan. 13th-15th)!  I scanned the front and back of the invite here, but also you can click the image to be linked for more info on the Visual AIDS site.  It's a great event & a terrific experience !!
January 2017
1/5/2017 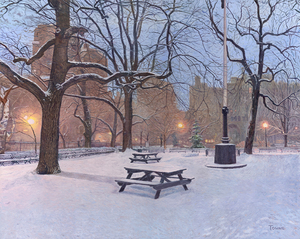 Happy New Years - 2017, everyone!  I'm attaching my new landscape painting, "Stuyvesant Square Park - Winter" which debuted in a show called "The Warmth of Winter" at The National Arts Club on Gramercy Park a few days before the 2016 Holidays.  I'm grateful to say the piece sold, and a portion of the proceeds will go towards the Club's "Will Barnet Student Show and Prizes" that will happen next April.  You can catch it on display until Friday, January 6th, the gallery is open 9-5PM (click the image to be linked to the NAC's exhibition page and info).
Loading...