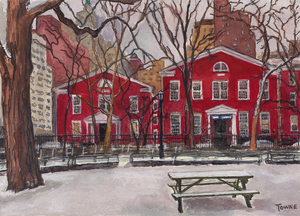 December 2015 - What a nice way to end the year... GMHC has selected an image of mine for their Holiday card that they send out to their friends and donors this year!  The painting is called "Stuyvesant Square Park - Winter", it's Gouache and Watercolor on Paper, 7 3/4 by 10 3/4, 2015 by George Towne.  On the inside of the card is a quote by Margaret Mead, which reads "Never doubt that a small group of thoughtful, committed citizens can change the world.  Indeed, it is the only thing that ever has."  Click on the Image to be linked to their website.  Happy Holidays !!
October / November 2015
10/18/2015 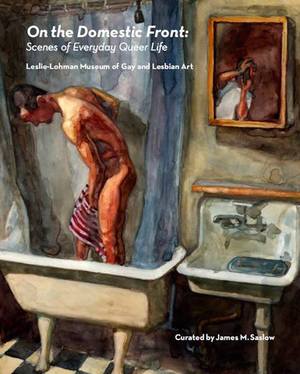 Fall 2015 - The show down at the Leslie + Lohman Museum has been such a hit that they have decided to extend the show for 5 weeks, it will now be open until December 6th, 2015 !  It's called "On The Domestic Front: Scenes Of Everyday Queer Life", curated by James Saslow, with over 70 works from the Museum's permanent collection, and my watercolor "Nude In Tub" has been included, (and used on the show's catalog cover! ) :D  It is a wonderful exhibition that tries to answer the question, "What do LGBT folks do when they are not having sex??"  Go find out the answer to this pressing question - lol - down at the Museum - 26 Wooster Street (click on the image to be linked to their site).
Late summer - Fall 2015
8/16/2015 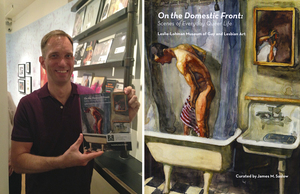 August 2015 - Some cool news - the folks at The Leslie + Lohman Museum of Gay & Lesbian Art were able to use my Watercolor Painting "Nude in Tub" that's in the new show "On The Domestic Front: Scenes of Everyday Queer Life" on the show's catalog cover !! The show just opened at the main museum space at 26 Wooster Street & it will run til October 25th, 2015. Come down & check it out !! (with special Thanks to catalog designer Harvey Redding !!  Click on the Image to be linked to Leslie Lohman's site.)
August 2015
8/7/2015

August 2015 - I'm very excited that I will have an artwork in the upcoming show of work from the permanent collection of the Leslie Lohman Museum of Gay and Lesbian Art called "On The Domestic Front: Scenes of Everyday Queer Life".  The show opens Friday, August 14th from 6-8PM at the main Museum space at 26 Wooster Street and runs until October 25th.  Curator James Saslow chose a 1994 Watercolor I did called "Nude In Tub" that I will be posting about soon.  There will be over 70 works in this exciting show - come check it out!  (Click the Image above to be linked to the Museum's Event page about the show).
July / August 2015
8/7/2015 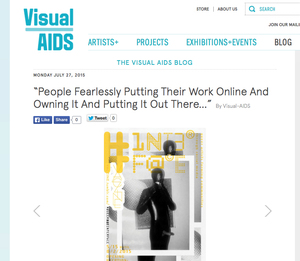 July / August 2015 - Just as the "Interface" show at Leslie-Lohman Museum came to a close, the Visual AIDS Blog's Kyle Croft interviewed curator Walt Cessna about the show and he sent some good love my way about my artwork... click the image above to be linked to read this informative & fun dialogue !
July / August 2015
8/7/2015 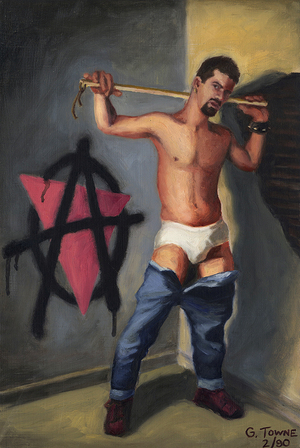 July / August 2015 - Philadelphia based Art Historian Tara Burk curated an online web exhibition for Visual AIDS entitled "Summer Streets", and included an older work of mine, "East Village Gay Punk", an Oil on Board piece I did in 1990.  The online show has some great selections in it and has a fun, summer theme- click on the Image to be linked it!
June 2015
6/5/2015 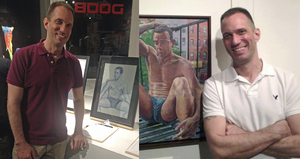 June 2015 - It's been a fun month getting to be a part of Events at The Leslie + Lohman Museum of Gay and Lesbian Art - this is a pic of me at the "Queer Art Interface" Opening two weeks ago with my painting "Nando - Fire Escape" and at the "3rd Annual Founders Day Benefit - Honoring Founder Charles Leslie" last night with the Drawing I donated to the Silent Auction - "Deon, Seated - Black Shorts" (thanks to those who bid on it!).  The Interface show is the summer show - open 7 days a week until August 2nd - go check it out before it closes!  (26 Wooster St just above Canal St - click on the Photo to be linked to info about the show).
May / June 2015
5/28/2015 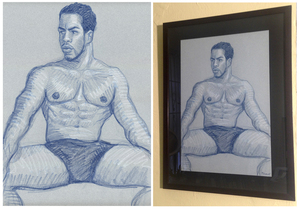 May / June 2015 - I've donated a framed Life Drawing to the Paddle 8 Online and In-Person Silent Auction to Benefit the "Founder's Day Event" at the Leslie Lohman Museum of Gay & Lesbian Art, honoring Charles Leslie!  It's called "Deon, Seated - Black Shorts", it's in a nice dark frame & matte (that's a pic of it on my wall next to the image scan).  It's 23 by 16" in the frame, Colored Pencil on Toned Paper.  The bidding starts at $150. for the Drawing and you can log in to the Online Auction and Bid now, (click the image to be linked to the Paddle 8 site) or wait to go see it and possibly bid in person at the Event, Thursday, June 4th at the Museum on 26 Wooster Street (6:30-9PM, tickets for the Event range from $125. to $1000. for this Benefit, & a new glossy Hardcover book about Charles & his collection called The Art of Looking, published by Bruno Gmunder will be available).  Check it out !
May / June 2015
5/28/2015 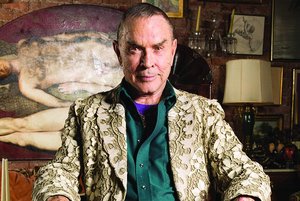 May / June 2015 - So cool to see this article about Charles Leslie, founder of Leslie-Lohman Museum of Gay and Lesbian Art in Next Magazine !  Without his foresight & generosity to struggling artists, there would be no Gay Museum in NYC. He's being honored in a fun Event there next week (in which I'll have a Drawing in a Paddle8 Auction), come/support the Museum if you can.  (Click the photo to be linked to the article in Next Magazine).
May 2015
5/6/2015

May 15, 2015 - The Invitations are here, the show is next week!  As I mentioned two posts ago, the "Interface" show, curated by Walt Cessna opens at Leslie Lohman Museum of Lesbian & Gay Art on May 15 and runs through August 2nd, 2015.  I'm excited to be showing my new painting "Nando - Fire Escape" in this edgy/fun group show.  The Museum is at 26 Wooster St., NYC - click the image to be linked to their website.  The opening on Friday the 15th from 6-8PM is open to the public & is scheduled to have some cool performance art happening - come & check it out!  (Painted-Photo Image above by Dietmar Busse.)
April 2015
4/15/2015 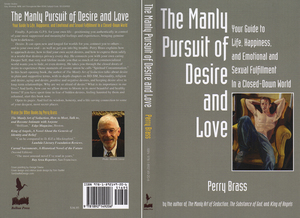 April 2015 - Great news - noted author Perry Brass was able to use my painting "Andy, Seated" as the cover image of his just-being-released new book, "The Manly Pursuit of Desire and Love" - Yay !!  Perry describes the book as the deepest he's ever written, with concepts he's been working on all his life.
While the actual publication date is not until June, Brass will be signing pre-publication copies, available for sale at his table at the Rainbow Book Fair (that's www.rainbowbookfair.org ), a really fun Event in it's 7th year at the Holiday Inn on West 57th Street this Sat. April 18 from noon to 6PM.  You can also click on the image above and be linked to order a pre-publication copy on Amazon.  Check it out !! 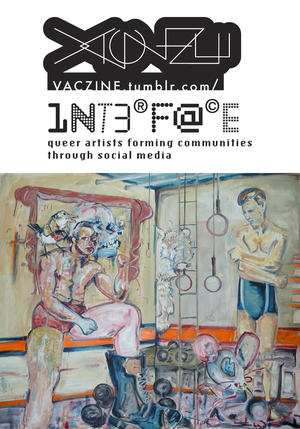 May 15, 2015 -  Upcoming group show I am excited to be a part of -- will be called "Interface: Queer Artists Forming Communities Through Social Media", and it will be in the main space of Leslie + Lohman Museum of Gay and Lesbian Art!  It's at 26 Wooster St, opening May 15th from 6-8PM and going through August 2nd. The show is curated by the excellent photographer Walt Cessna, and it will feature "29 Queer Artists who work in a wide variety of mediums, that have developed an artistic community through social media platforms."  Walt also has the exciting Graphic-Designer-extraordinaire Frank Gargiulo -- from the Broadway-show-Advertisers "SpotCo Design"  -- designing a publication called "Vaczine" to compliment the show, which should be for sale at the opening, & throughout the show's run.  Click the Image above to be linked to info on the LeslieLohman site, and the show has a Tumblr blog forming here:  http://www.vaczine.tumblr.com -- and it's already had a shout-out from the Huffington Post that you can read at this link (cut & paste into a browser if the link doesn't work directly for you):  http://huff.to/1ahT76v
Hope to see you at the Opening on May 15th!  (Image Above by Scooter LaForge:  "Masters of the Universe", 2011) 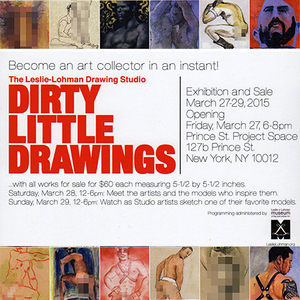 March 27-29, 2015 - The postcards are here, & the show is only a week away!  The 2015 "Dirty Little Drawings" Show at The Prince Street Project Space (part of the LeslieLohman Gay Art Museum) - 127b Prince St will open at 6PM sharp on Friday, March 27th, & the sales ($60. each, all works measure 5 1/2 by 5 1/2 inches) start immediately.  That night goes until 8PM but there will be additional hours to view what's still available on Saturday & Sunday from noon to 6PM.  As the card says, "Become an art collector in an instant!"  Or just come say Hi & view the works by over 40 artists.  I was able to do 8 images, mostly gouache watercolor - & will be posting them on the "Erotic" page of my site soon (even though only two are too hot for Facebook).  Click the image above to be linked to the Wordpress blog they are maintaining for the show.  See you there !
March 2015
3/6/2015 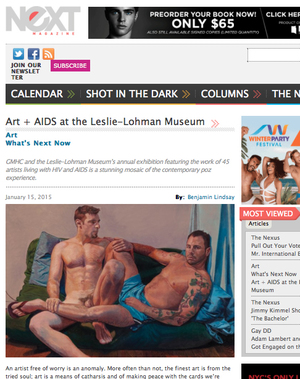 January 2015 - Always grateful to get a press mention for my artwork - my thanks goes out to Next Magazine for reproducing my Image "Rich and Seth" in relation to the GMHC "Art & AIDS: Amor y Pasion" show opening at the Leslie Lohman Museum of Gay & Lesbian Art this thurday night, 1/22/15 from 6-8pm!  Click the Image to be linked to the Next Magazine site.
January 2015
1/18/2015 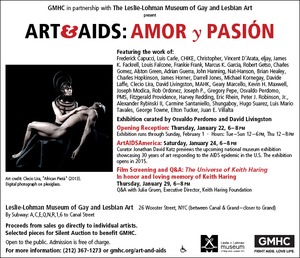 January 2015 - I'm in a big group show next week of HIV Positive Visual Artists from GMHC, to be held at the Leslie-Lohman Museum of Gay and Lesbian Art called "Art & AIDS: Amor y Pasion". I will be showing one painting and one life drawing. The opening reception is Thurs. Jan. 22nd from 6-8, and the show will be on display until Sunday, Feb. 1st, 2015.  Additional Events during the show's run include a lecture/slideshow by Art Historian Jonathan David Katz on Sat. the 24th from 6-8 called "ArtAIDSAmerica", and there will be a screening of a documentary about Keith Haring (whose work will be in the show!) on Thurs, Jan. 29th from 6-8pm, both of which I think I will be attending as well.  Click on the Image to be linked to GMHC's info on the show - and please come check it out if you can !!
January 2015
1/17/2015 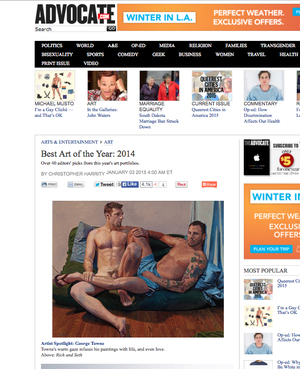 January 2015 - As it turns out, at the end of last month I was put into "The Advocate" Magazine's "Best Art of the Year: 2014" list - WooHoo!  Such an amazing honor, especially from an important Magazine I have read, loved and even subscribed to for so long.  It states that the finalists were chosen from over 40 Editor's picks of the year's art portfolios.  This was able to happen because Here Media Editor Christopher Kit Harrity had seen my work on Social Media such as Facebook, and he had done a very nice online article about my paintings with a slideshow of 25 Images back in March 2014, and I'm very grateful.  Click on the image to be taken to the Advocate's site and see this as well as the other finalists!
January 2015
1/16/2015 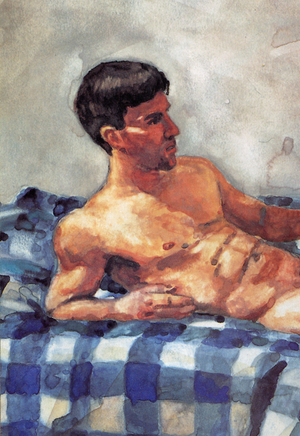 January 2015 - was grateful that a Watercolor Illustration I did for "Mandate Magazine" in the 1990's was chosen to be a part of an online exhibition for "Visual AIDS" called "I wanted Body as Form and Vice Versa", curated by Christopher Stiegler !! (The Image is a cropped version of my painting, click on the image to be linked to the N.S.F.W.)
Loading...